A re-fight of the scenario (see previous post) was arranged at our Friendly Local Game Shop.  Members of the Maplewood Irregulars took the parts of the French and the Indigenous whilst yr. humble correspondent played referee.

The game began in a similar vein - although the French commander, Capt. Andé, send a company of Tirailleurs to his extreme right flank, effectively out of close support. 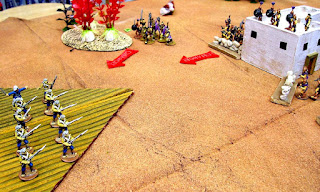 Which actually made little difference, as the Martian player, the notorious Dr. Goldwyrm, placed two bands of cutters in close proximity, though hidden from the advancing French, on the French LEFT flank. 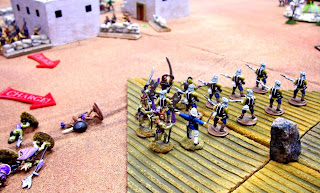 The Martians regrouped for a turn behind a clump of red weed, and then charged the 80mm mountain gun.  The Idaeus Fons Artillery fought bravely for several seconds, then tore off for home.


The second cutter band had also regrouped, and seeing the marines as the closest target, charged them, and were shot down without ceremony.. 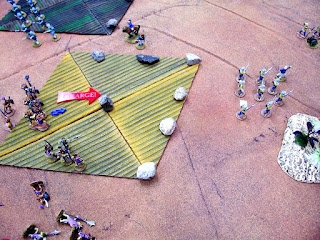 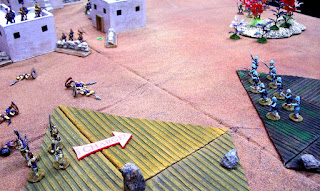 On the right flank, the first Tirailleurs had reached within close rifle range of the village, while the Martians fired case shot, either too low or too high. The Tirailleurs closed into line and issued a double volley-fire on the Martian shooters, killing 80% (8 out of 10).

Did I mention "case shot"? Yes, because the evil Dr. Goldwyrm managed to prolong the American 6 lb gun down the stairs and across the village.  He had rolled well - though I was rather hoping he'd end up with the cannon lodged half-way down the steps like a bad moving day.

It was a good showing, but the French had to withdraw - the Tirailleurs to cover the withdrawal, and the Marines to recover the mountain gun, which the jubiliant surviving cutters were trying to drag back into the village.

J Womack has suggested that this scenario might be too difficult for the French, and I'm beginning to agree. In Captain Andy's defense, this was his first game of Soldier's Companion.  Dr. Goldwyrm has played SC before, and upon being tasked with playing the indigenous, happily reached for my hidden movement counters.

I might try adding another band of Martians to the French side - these would be Irregular Mercenaries from the colony at Idaeus Fons; rather the equivalent of Bashi Bazouks.  The will provide a bit more "weight" for the French, without bringing too much firepower to the table. 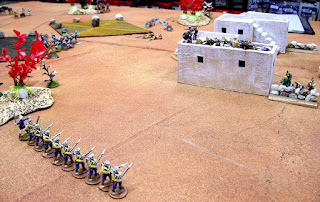