(Editor's Note: this article was written in March 2021 and delayed due to circumstances beyond my control...)

(Fin de Siècle* is the 1880s and 1890s, because using the term "Victorian Paris" just seems a bit odd, n’est-ce pas?)
Paris in the 1870s had just undergone the Haussman Reforms - many of the narrow, medieval-style streets had been demolished and straightened, and the new broad avenues (often tarmacked to deprive the Parisian mob easy access to paving stones) cut, not without coincidence, straight as a cannon shot through the metropole, linking the great monuments and palaces in a harmony of civil engineering.

Paris is a grey city. Granite and limestone facades, marble adornments, and gypsum "Plaster-of-Paris" create that unique, dreamy pale-and-cream grey that characterises Paris and makes her a favourite of 19th and 20th century artists. So, away with the red brick, which evokes 19th century Philadelphia or Chicago; gone the yellow brick so beloved of Georgian London or York. What we're looking for now is granite and limestone, and gypsum plaster stucco - the last possibly coloured with some added tinctures to relieve the monotonie grise.

To start, here are three European/French-style 25mm/28mm buildings by The Miniature Building Authority:

Restaurant
The Dinner Clubs were an integral part of Parisian intellectual life, as political assemblies were banned under the Second Empire. Victor Hugo, Emile Zola and other influential intellectuals were usually members of one or more of these clubs.

A detached building. Size 7" x 4", with a 2" x 2 ½" extension , two floors, with a hipped roof. Suggests a rear allotment or back yard, stone, stuccoed walls are needed. 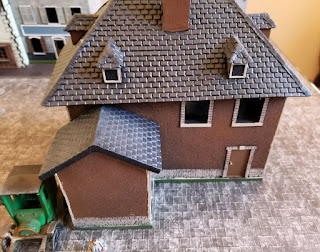 Outdoor dining was relatively uncommon in 19th century European cities, where the urbanites were more likely to visit the local suburban gardens and parks and either purchase food from vendors, or have an impromptu picnic. Still, for any Al Fresco advocates, the more Bohemian artists would enjoy dîner à l’extérieur on occasion, but usually in the back yard/allotment, away from the dust, dirt and odors of the street.

Cafe
A more purely urban building than the Restaurant, due to the clean gable ends. Size: 4 ¼" x 5", three stories. This model will go nicely as part of a row of houses along the street. I will probably use this model as a bakery (boulangerie), because in Paris, ya gotta have bread.

Caretan House
Caretan is found on the Normandy Coast, hence the model isn't taken from a Parisian design. That's not a problem, since - despite the windows on the gables, the ends are clean, and its size, 4" x 6", two stories, allowing for placement next to the Cafe/Boulangerie, probably as a working-class residence.

All of the MBA buildings listed here do well for 19th century Paris - dormer windows are a must. I'm still on the lookout for: The Patisseri and the Corner Shop(s).

Also from MBA. some 19th century street lamps. These were pre-painted, which is welcome. I might drag a dry brush of dark grey across the post to bring out the detail.

These are out of production. I'm not sure why so many of Miniature Building Authority's European line is OOP. Perhaps the moulds were lost in China?

All of these MBA buildings were supplied more-or-less painted, but each could do with some cleanup and dry-brushed highlighting.

The scale is very much the smaller, non-"heroic" scale - which I usually refer to as "25mm/28mm". Larger 28mm/32mm scale buildings will not fit well with these, as I will demonstrate in the next, upcoming post.

I've had my eye on this contraption for a few years - it seems that every time I would go to Old Glory's website, I would lose track of where it was, and then my attention would be taken by another new shiney. It's carefully concealed in the 25mm Figures/Fantasy/SciFi Vehicles folder.

Recently I stumbled over it (looking for London thugs), again, but I quickly popped it into my cart and pressed the "fire" button. And I'm glad I did.

The Walking Land Monitor embodies much that is good in Victorian Sci Fi, while avoiding too deeply the "Steampunk" trap: it can be used across nationalities (though the design quite rightly looks American) but doesn't have the silly "I found this in the remainders bin" quality that seems to attend upon certain quarters of this hobby.

The kit comes in 15 parts. The resin is well cast, with some flash that's easily removed. The detail is very good, with rivets, access plates and hatches moulded on. Included are two gatling guns (there are two ammo drums for the gatlings, not shown in the picture) and what looks to be an 11" Dahlgren - very appropriate.

My only quibble is a minor, apples-to-oranges one - I wish it was a tripod. The undercarriage/drive train (left of the turret) precludes an easy conversion to a three-legged version. As I'm following the Space: 1889 canon of Imperial Germany deploying tripods, I'm placed in something of a quandary. Shall I build it as is, or attempt a conversion? 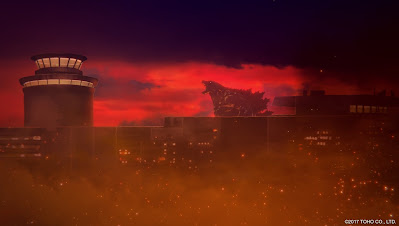 The Apaches of Paris

Les Apaches de Paris was an urban criminal gang movement, which flourished at the Fin du Siècle in France's largest city and capital. Their specialty was violent crime, often targeting the bourgeoisie with assault, mugging and other, more sordid, crimes.

The term was coined in 1907 by journalist Victor Moris, in describing the furious war between two rival gangs. For their part, Les Apaches embraced their nom de guerre, battling both police and each other with equal enthusiasm. Their worker's areas in the outer regions of Paris became a no-go area for the police, and upon nightfall, they seemed to rule the city.

While this is not a particularly fertile ground for miniatures manufacturers, there are several sets of minis that will serve for Les Apaches:

Brigade Games: River Pirates. I painted up a batch of these a few years back.
The three chaps in the centre would work well - the one in the middle is spot on.

Northstar Miniatures: Anarchists. These were originally released (in part) as the Brick Lane Commune for In Her Majesty's Name. They're now available from North Star in smaller packs. The knife-wielding figures are particularly good.
Old Glory: London Thugs. I've just placed an order for these; once they arrive, I'll put up a picture for size comparison purposes. Old Glory has a lot of miniatures, and often, the photo is either not very good or lacking altogether. This one is taken from the OG website and is rather good:

Again, the figures in short jackets and worker's caps look spot on. Adding the odd revolver or "Apache Gun" (a barrel-less revolver with a shiv attached) would complete the look.

I'll be working on painting up some of these, hopefully before Christmas. Probably....

Posted by kmfrye at 8:36 AM No comments:

The first finished Victorian-era miniatures of 2020* are from the Old Glory/Blue Moon "Things that go Bump in the Night" line: I had a Howling Good Time.

Ye gods and little fishes!, as my grandmother would say; these were both a chore and a delight to paint. I purchased this box set because I like the style of the ladies, and wanted some models for my Trieste Company for In Her Majesty's Name. The ladies were indeed fun and rewarding to paint, but I found the male figures difficult and a bit frustrating, especially the gypsy-like character.

All of the models have good detail, excellent proportions, and decent animation. The ladies especially have a nice style.  The male figures are rather "busy", with shirts, belts, vests, packs, jackets, hats, scarfs, etc. Due to some of the odd accouterments, combined with the civilian portrayal, I found it difficult to tell exactly *what* was being depicted by the sculptor. The box art was helpful, (though not as helpful as I would have liked) and I'm fair pleased with the result.

As with the Sleepy Hollow set, I yielded to the impulse to paint these models' bases as though they were game pieces - packaged as they are as a stand alone game (Nota bene; the one-page rules were absent...again.)

I'm adding another category for rating miniature figures; relate-ability. If I have to guess at what the sculptor was intending, the relate-ability rating goes down.

Also included in the set are several werewolves, which I set aside, lost and found again. I plan on painting these up in the near future, as part of an IHMN/1889 Gothic game.

*Point of clarification: I started painting these several years ago, at least as far back as 2016. As I mentioned, the male figures were a chore.
Posted by kmfrye at 4:31 PM 4 comments:

Starting off, I'd like to apologise for the lengthy gap is posts.  Sorry about that.  I've been very busy working on a 7TV game set in 1970 Philadelphia, and have been conducting research and making visits into the same. I should be able to work up a crossover scenario or two for the Victorian (or at least Edwardian) era as a result.

In fact, it was due to the dearth of posts that I decided to pick up some of Askari Miniatures "Beau Geste" personality miniatures.  At least give'em a review. I'm also working on finishing some of the Martian Trieste Company miniatures for IHMN/S:1889. Now on to Fort Zinderneuf:

Ali Ibn Maurer and Askari miniatures have done an excellent job in capturing the personalities of the protagonists of "The Last Remake of Beau Geste", which is, of itself, a film that is perhaps, more funny than not. Rumour has it that constant studio interference dulled the humour, and having seen the film years ago, I'm inclined to agree.  That said, the figures are excellent.

The only missing item is the Ann-Margaret miniature.

Posted by kmfrye at 7:45 PM No comments:


Well, it looks kinda Victorian, anyway.  Sorry for the lack of posts, I've been caught up in my 1970s Cthulhu miniatures project. Some painted Victorian minis coming soon. - finis -
Posted by kmfrye at 12:46 PM No comments: