The scene was a village near the Eastern Tempe foothills on Mars. Martian gunrunners from Nilokeras were delivering a cargo of modern rifles to sell to the Tempe tribes.  The French learn that something is up, and send a force of Tirailleurs Martiens and Infanterie d’Marine to investigate.

Someone with a bright future on the Quai d’Orsay decides that the mission would also make for a useful training exercise for the Tirailleurs, who have only recently taken the field under French officers. The Marines are instructed to hold back a bit while the Tirailleurs scout the village.


In the village, several bands of irregulars have gathered to buy the modern rifles. They spot the French column as it approaches and take up positions to resist this latest unwelcome incursion.

The French had two 10-figure companies of Trained Martian Regulars and a 10 figure company of Veteran Marines, with an 80mm mountain gun in support.  Their mission was to seize any contraband weapons (i.e. Terran) in the village.

The Martians had two warbands (20 figs ea.) of Martian irregulars and an old 9-pdr smoothbore muzzleloader, recently sold to them by Terran arms dealers.

There was also a detachment of Martian regulars from the city-state of Nilokeras, off-loading crates of Remingtons from a small cloudship. The Nilokerans were under strict orders to avoid contact with the French, as Nilokeras is neutral and trying to avoid antagonizing the French while simultaneously working to undermine French authority in the Eastern Tempe.

The first two turns saw the Tirailleurs advance across the oddly non-Euclidian fields toward the village, whilst the French marines discussed whether they would be back to camp in time for lunch.

Kenzie had to make a difficult choice in holding fire until turn three – the Tirailleurs had entered the cannon’s range on turn 2, but were still out of musket range. He correctly hoped to break the sketchy morale of the Francofied Martians by hammering them with as much shot as possible, and so had waited until they moved a bit forward.


Rob had gamely played the scenario as if he didn’t know what was waiting for him in the village, but with the sounds of hostile artillery and rifled muskets, he sent forward his artillery and Marines. 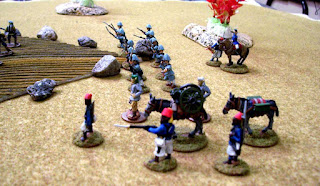 The villagers had yet another surprise waiting, as a loose band of cutters burst out of a clump of red weeds and charged the Tirailleurs, who were just picking themselves up from the hostile cannon shot, when they noticed their officer was wounded. (They had missed a morale roll by one, hence they were “checked“). A redoubtable sergent dragged Capitaine Baudoin behind the firing line.


The Tirailleurs let loose a ragged volley, which failed to halt the charge, and we had our first melee. The Martians were a grade better than the Tirailleurs in training, which gave them a +1 on the melee rolls. The Tirailleurs took one “Pushed Back“ and two “Dead“ results. One of the dead was the sergent defending the wounded Capt. Baudoin.  The Tirailleurs bolted. 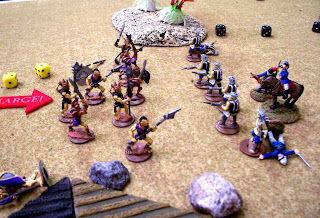 Normally, the Martians would have butchered the wounded, but they failed their post-melee morale, went Frenzied, and immediately went chasing after the fleeing Tirailleurs. As the Tirailleurs retreated, Capitaine de vaisseau Buquet, commanding the French, galloped to intercept them.


On Turn 4, the Native Martians had the initiative, by virtue of winning the most melees in the previous turn.

The cutters, though disordered, launched a frenzied charge upon the fleeing Tirailleurs, who were hopefully being steadied by Capitaine Buquet.  Another ragged volley was enough to drive the indigs off.

The French advance was checked – the only bright spot for them was the bursting of the 9-lbr (having rolled a 1, followed by a six) and the killing of one of the crew by a sizable chunk of metal bearing the legend “City of Vicksburg – CSA”.

The French Marines were detailed to take the position of the now shamble-ated Tirailleurs, who had been reduced to about 50% of their original strength, and by rights would have routed if it had not been for the rallying by the Capitaine and his trumpeter. 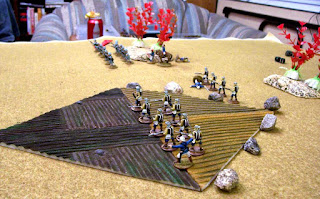 By turn six, it was becoming apparent that the Martians were going to get all of the weapons back aboard the cloudship. Kenzie had drafted his surviving cannon crew as lascars, and although one sub-band of musketmen had been driven off the walls, the other was making life interesting for the Marines, having forced a checked result after a few stray shots.

To further impede the French, another band of cutters had occupied the path the Marines were intending to take, making another melee likely.


We agreed that the Martians on both sides had accounted themselves well, and that the engagement was a marginal victory for the villagers.

I must admit to being tolerably pleased with myself for this scenario.  What I thought might have been a walk-over for the French turned out to be a tough little scrap.

The French firepower was off-set by the Martians taking cover in the town, plus the advance was kept off-balance by judicious use of Martian melee troops.

The added element of a French objective that might lift off at a turn's notice forced the French player to push on, rather than stand off and subject the town to cannon and rifle fire.

The Soldier's Companion initiative system (once tweaked) is simply the best I've seen to simulate the fortunes of war and how a battle can suddenly spiral out of control.  The three turns in which the Tirailleurs were battling for their lives essentially brought the French advance to a standstill. As long as the natives are winning the melees, the army (and time) slows down to reflect the outcome "hanging by a thread".

This goes some way in off-setting the European players technical and quality advantage.