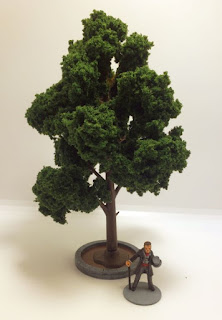 As mentioned elsewhere, I find the conceptual execution of the world of Malifaux difficult to follow: I understand the desire to place their setting in a Victorian-inspired parallel world, I just find the models too over-the-top, Steampunk-plus-Outre, to be of any use for my In Her Majesty's Name games - except their urban terrain.

One thing, at least, that the folks at Custome Meeple get, is the necessity of dressing a city like a city. Please pardon the truism, which I think is merited, because that self-same truism seems missed by a sizable percentage of hobby manufacturers. As far as I can tell, only Wyrd/Malifaux offers stuff like:

City Bench with Light Post (aka Dollhouse Bench*).
Where does one wait for the Omnibus? Restaurants and Taverns were popular stops for the Omnibus, but evidence of the embarkation points seems scarce. Where on the Place de la Concorde does one get picked up? At the Obelisk? At one of the Fontaines? Which one?

With this simple MDF bench and light post, and perhaps a simple ticket kiosk nearby, we have the answer.

There were some issues with this model: there was no lamp post provided. Custom Meeple included three flat, amber, Lucite disks for the lamps, which I set aside for some other project. I used a round plastic coffee stirrer and my own lamp from Old Glory to finish both models.

That said; selling an incomplete kit? Shame on you, Custom Meeple.

City Tree Planters (Dollhouse* Tree Planter)
Another must-have for late 19th century city-scapes, at least those influenced by Paris, is the Boulevard line of trees. These MDF planters are just the thing to bring refreshing air and shade for those promenading along the avenues and boulevards. My trees are Woodland Scenics 1517 Dark Green, selected for the smaller footprint, which are then glued to a metal base, and covered in scenic dirt.

Advertising Column (aka Malifaux Millbank Street Morris Column)
Named after Gabriel Morris, the leading advertising printer in France during the Second Empire, these columns were introduced to keep advertising bills (or billets) off the buildings and onto the column. These don't seem to have caught on much in the UK or USA, so they are one of those little items that makes a Parisian street all the more so.

I don't actually have the Custom Meeple version - I had a couple from Alien Lab (in Poland) via eBay. The shape seems more in line for 1890s Paris, and as it was resin, and not MDF, I didn't need to build it.

Note to you resin casters out there - Resin is still faster, cheaper, and doesn't smell of formaldehyde.

Notes:
Despite Custom Meeple/Malifaux being closer to the 32mm Heroic Scale, unlike their buildings, these 19th Century urban terrain bits work well with 28mm scale from manufacturers like Foundry, Northstar and Old Glory.

*The marketing for this line is targeted for Malifaux players, so Custom Meeple can perhaps be forgiven for the arcane Line associations. The Dollhouse is actually a 28/32mm Victorian Mansion.