Up the Chari Creek

Had another opportunity to play the French Conquest of Chad .Went to Ellicott City to play an evening game with Bob Giglio's crew, using Soldier's Companion (Mk. II).


The scenario was based on the Battle of Kouno, 28 October, 1899, on the Chari River which flows from Lake Chad in French West Africa.


The main French column entered on the board edge, while the commander was aboard the river steamer.  The natives were lying doggo on the coast line, while a  flotilla of canoes, filled with warriors, began to issue from the village, across the sand bar.

As any old colonial player knows, there is an instant where the leading European units make contact with the natives, and one side "recoils". In this instance, it was the French, as the commander, caught off guard for two rounds, who had to contend with small arms fire and attacking bands of spear-weilding tribesman.

The steamer happily continued up stream, lobbing the occasional shell in support of the main column.

It is a testament to the quality of the Tirailleurs Seneglais that, after falling back, they rallied, at one point even launching a frenzied counter attack. This helped swing the balance against the Dervishes, and stemmed the attack. With the return of the steamer and the reserve ammunition barge, the French were in position to resume the advance, but with darkness falling and scads of dervish occupying the village stockade, the assault would needs wait until the following day. 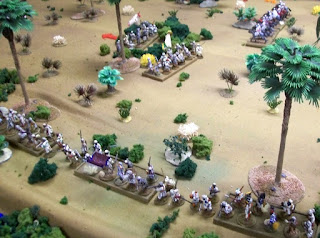 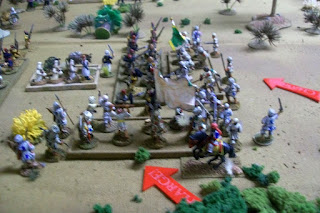 On the river, the steamer Leon Blot attempted to push on toward Rabeh's kraal, only to be  met with a flotilla of war canoes. The superior speed of the steamer allowed the Blot to steam past the boarding hazard, only to realise that the main column was in danger of running out of ammunition, and had to come about and run the gauntlet a second time.

The "minute de fou" or mad minute ability give the Lebel breech-loader a hella-lot of firepower, which was extremely effective in sweeping away entire warbands of dervish - this despite having armed all of the natives with various firearms and even a battery of cannon. Despite the danger of jamming, neither French commander hesitated to use this, effectively doubling the French fire power. The French commander, Jeff H. at one point remarked "Nous n'apportons nos fusils de les regarder!*"

Hats off (chapeau!) to Bob G. for researching an oft-overlooked scenario in Colonial gaming (Bob credits Ian Croaxhall for supplying the original data). This campaign is actually an indirect result of the battle of Omdurman, as the remnants of Dervish army, shattered by Kitchener, moved east beyond Kordofan and towards Lake Chad - putting them and their leader Rabeh az-Zubeyr on a collision course with the French.