All Your Liftwood Are Belong To Us 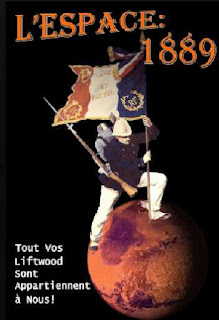 Here's a bit of frivolity for your delectation - I found this image on an old thumb drive. It's from a shirt design, made for the referees for our convention away teams, back in 2008.  We wanted something to help set the tone as being apart from British Colonial.

We also gave one to Uncle Frank (Chadwick) - after all, a man can't have too much Space 1889 memorabilia.

The image is of a marsoun (French Marine Infantry), planting his regimental banner in the north-east rim of the Acidaliium Basin on Mars - not exactly a hopeful sign for the Acidalium League.

The French phrase is a translation of this article's title, with a nod to Zero Wing - makes a nice change from the "Keep Calm..." meme that's currently making its rounds.