Chief Inspector Dupin. A very nice miniature by Artizan Designs (PLP063 - Gaspar Toucan) in their Thrilling Tales line, and captures a certain Suchet-ness, n'est pas? The bow tie and handkerchief are actually a deep pink, which the camera was unable to capture. 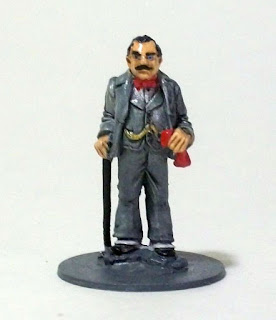 Next are two of the Parroom Miniatures Victorians range (VEP_12). The line is currently on hiatus, so neither of these latter miniatures is presently available.

Parroom Assassin. I was painting the face of this model when I suddenly realised what it was (probably) supposed to be - a certain anarchist with a Vendetta. If the line ever goes back into production, I might buy this mini again and paint him with his "Guy Fawkes" face. He would be fun to chase across the roof-tops of Paris.


Parroom Anarchist. My least favourite miniature of the three. A hunched, closed off miniature makes for very little character and rather difficult to paint satisfactorily.  The round, black bomb is neat. The non-descript nature of the model was doubtless intentional, and for an IHMN game, I would allow this model to blend into the crowd, only to spring out and hurl his bomb at any player's or passing Austrian Arch-Duke's miniatures.