...meanwhile, in the Anglo-Egyptian Soudan...


The Colonial Boys Club, a successor to the Baltimore Area Tactical Brotherhood, or BARTAB, met in Ellicott City on a Saturday last October for a large Soldier’s Companion game, hosted by Bob Giglio of Historicon and set in the Anglo-Egyptian Soudan.

Set during the early Sudan phase (1882-1885) the British column, supported by reformed Egyptian leftovers of Colonel Arabi’s “Nassir Moment” and some Bashi-Bazouks (by George, I do so like saying that name – Bashi-Bazouk!), were advancing on a local town where a British Resident had been taken prisoner.  Some 16-plus warbands of Dervish and Hadendowah “Fuzzies”, plus some mounted elements, were detailed to resist.

Caught without my camera, I was forced to use my I*Pod, of which I am no sure master.  In fact, if you picture the ape, playing with the bone, from the film “2001”, you have a good appraisal of my technical competencies. Or, if you like, imagine the following piccies were filmed in “Korda-Scope”... 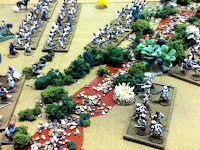 The Anglo-Allied were played by Chris J., aka Michigan Slim, Dennis O., and your humble correspondent.  The Madhists were played by Brian H., aka Higgs Pasha, and Randy M. aka "Shut Up, Randy".

The First turn saw the Anglo-Egyptian forces moving toward a dry wadi - the Dervish had been reported slinking amongst the rocks. On the far end of the board was the miserable collection of mud huts where the captured Btitish officer awaited rescue, no doubt in considerable dudgeon.

By the end of the turn, some of the Mahdi's own ansars had been contacted by out Bashi-Bazouks (Bashi-Bazouks!).

The Ansar fired a few shots at the Bazouks, who were only rated as Trained (and that, charitably) but they managed to make their morale roll sufficiently (6 or less on 2d6, after casualties) so that they only went "checked".

The Egyptians to the left of the Bazouks went into a double line and, on the next turn, volley fired on the Ansars, taking 3 or 4 casualties, but who also managed to make morale, and also went "checked".

On Turn 3, the Mahdists won initiative, and after some suspicious events rolling, managed to bring their second army of  Hadendowah onto the board - to the sounds of Anglo-Egyptian groans.  The Fuzzies began to pour down the hill toward the Anglo-Egyptian forces.

As the sons of Valentine Baker-Pasha prepared to volley-fire, a troop of Dervish Camelry advanced upon the right.

Rather than be caught flat-footed, the Egyptians under Colonel O'Toole (himself ex-British Army after being caught in a compromising position in a railway coach) charged the Dervish camelry, and drove them back. 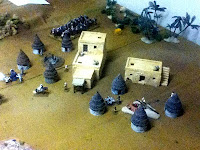 Meanwhile, in the village, the British Resident has managed to free himself, and is fighting his captors for his life. 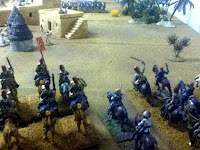 British Cavalry brigade riding to rescue the Resident...what's that in the distance?  Natives?  Prepare to Charge! 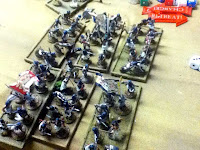 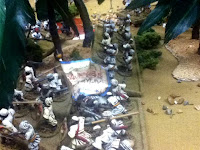 These blokes are using a palm grove for cover to skirmish with the Naval Brigade. 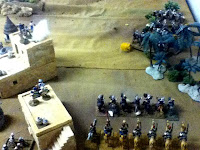 Within the village, as the Cavalry Brigade charges the Mahdist Irregular Horse, the British Resident has gained the roof-top, and resists manfully all attempts to recapture him.


In the centre, the Anglo-Egyptians advance, and the Dervish are thrown into disarray.

With the arrival of cavalry in their rear, and with their leading warbands being shattered, the Mahdist Army withdraws from battle - like a cur, ready to bite if molested.


Post-Game Thoughts:
A fun and tough scenario, and much harder than the recount might suggest.  Anglo-Egyptian dice were afire, and the Dervish players were frustrated at almost every turn.

The biggest mis-calculation on the Dervish part was in their maneuvre of the second wave.  As the British Cavalry arrived, the Dervish peeled off half of the second wave to face them.  Pulling troops away from the line can be disastrous in Soldier's Companion, as one is rarely certain of regaining initiative in the next turn. The Dervish had to wait 2 turns before they could continue their advance, and by then, the leading warbands had been rather badly shot up.


Early Sudan is an interesting period to game - Anglo-Egyptian troops are of a highly varied quality (similar to Zulu War), which means they must be used delicately, or you risk another 1st El Teb.