Or is it "Gashantry"?  which has a certain "Irish Fishing Village" ring to it...

This is my first troop of a flight of Œnotrian regular cavalry, which are intended to support my 7th "Bellicose" Œnotrian Legion in action against the Red Menace (Britain). I painted them in the purple livery that the 7th sports - I'l have to add some white trim to bring the flight into the proper historical canon. 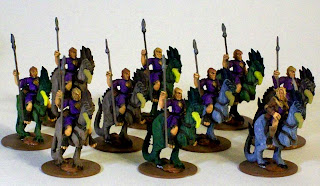 One of the adjustments we made to Soldier's Companion was to cut the size of mounted units in half.  Gashants are pretty expensive, and RAFM's recent price hike hasn't sent me rushing back to buy more.

IIRC, I picked up a batch of Gashants and Officers on eBay some years ago - these look like they might be a garage variation of the RAFM Gashant.  I have a lot of the RAFM gashants (which will be appearing eventually) but I like this variant because it comes with Martian "tack".

The officer had his arms altered by yours truly to give him a different look than the infantry officer (aka "First Sword") of the Legions of Mars boxed set.

Figures are RAFM (more or less). Lances are from Old Glory Accesories line - Short Thrusting Spears with Cast Tips. It would be interesting to try and outfit a troop of Gashants with javellin-armed riders, rather like the Irish in the 16th Century. It would certainly fit in with the Renaissance character of the Œnotrians.