Incident at a Martian Farmhouse: IHMN 1889 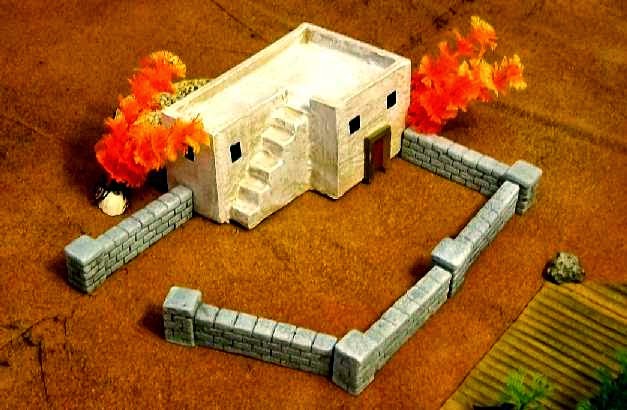 Megz and I had our first test run of In Her Majesty's Name.   Since I don't have enough dedicated figures for my desired factions, I decided to try a scenario set on Mars in the universe of Space:1889.

The Mad Guru: Incident at a Martian Farm House

(This scenario is based on the Mad Mullah scenario from Soldier's Companion, using the "Bring Him Back Alive" objectives from In Her Majesty's Name.)

British authorities in Syrtis Major have learned of a new Martian rhabmahg, or holy-man, named Sootamon Khal, who has been preaching the end of British rule in the Syrtis Lapis region. The Intelligence office in Syrtis Major orders the Royal Martian Constabulary to bring in this "turbulent fakir'...

Acting on a tip, a section of Martian constabulary, led by their sergeant and a political-wallah, make their way to the isolated farmhouse where Sootamon Khal is rumoured to be staying.  They make their approach just before sunrise...

(Of course, the Martians know the British are coming - they've been tipped off by any number of sympathisers working near or within the ranks of the constabulary...)

Crown Objectives: Capture or disable the "Mad Guru" and bring him to Red Newgate in Syrtis Major, to be detained at Her Majesty's Pleasure.

Turn 1: The constabulary troops crept up to a ridge behind the farmhouse.  No sign of activity was observed..

Turn 2: Perhaps fearing an ambush, the advancing troopers began to move to their own right flank.  Suddenly, a shot rang out, followed by another and puffs of black powder smoke issued from the near farmhouse windows.  One constable went down. It was a trap, after all. 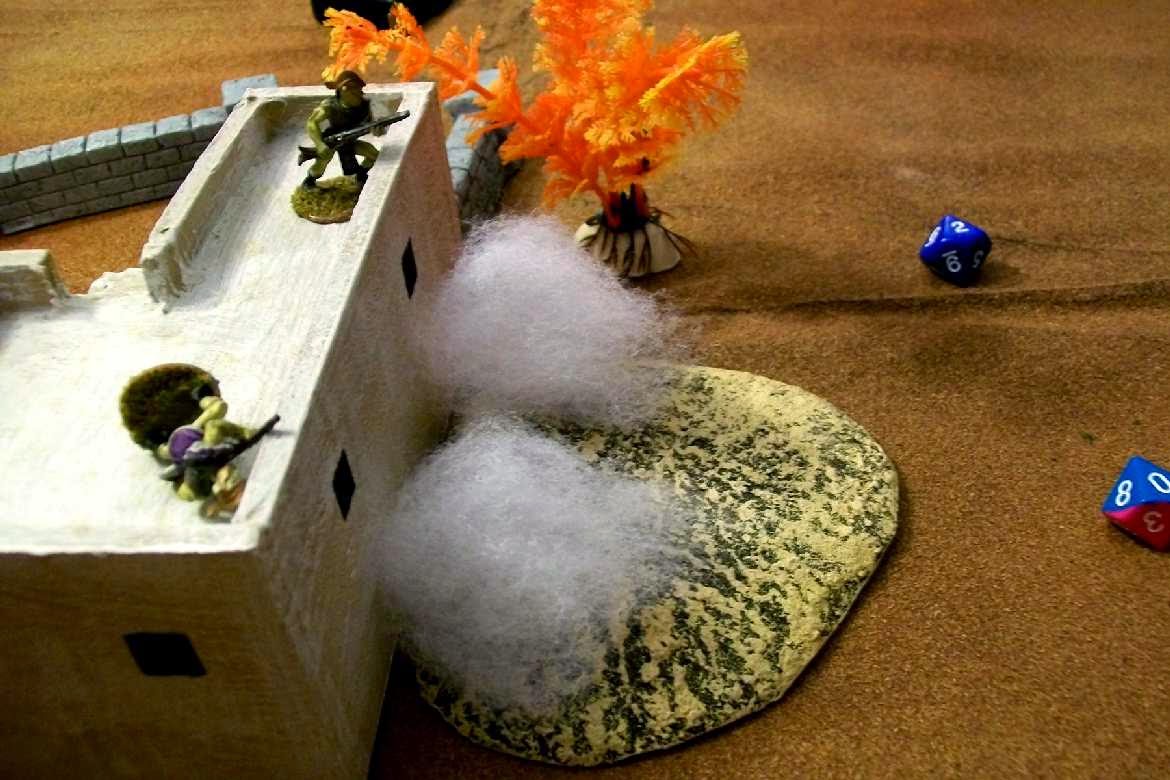 (The muskets the Martians were using only had an 18" range, and as the constables began to shift to flank the farm house, they were moving out of range. The Martian sentries decided to take a chance...) 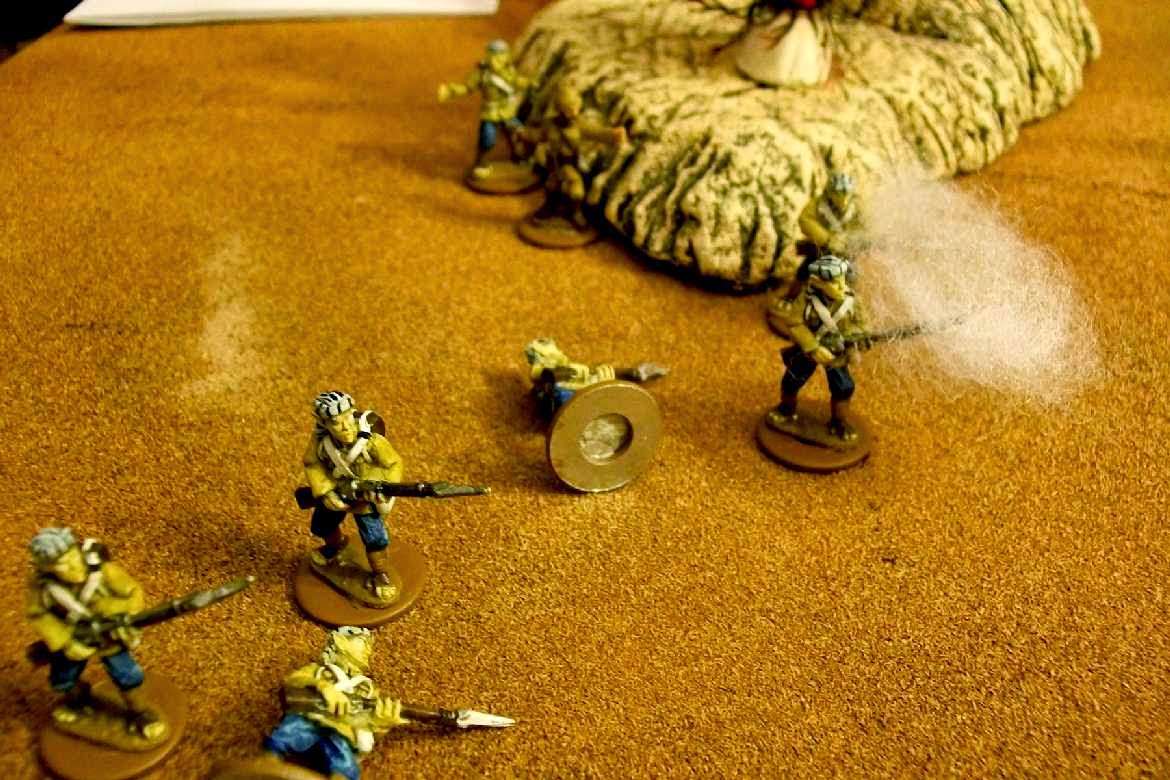 Turn 3: The troopers were split into three groups - two had crossed the open ground and were now in the high weeds behind the farmhouse, while the rest of formed a ragged line and fired at the martian musketmen popping up on the farm house roof.  From atop the steep hillock, Lt. Bertie encouraged the lads with shouts of "get on with it, then..."

At one point, a Martian bullet found our Bertie, and I thought we had the Red Offworlders without a leader, but he was saved by his "Stealthy" skill, and survived to move, prudently, to better cover.

Turn 4: Clashing their spears upon their breastplates, a band of five Martians charged out of the crop fields on the far side of the farm house. The constables attempt to fall back and form ranks.


Turn 5: Harassed by sporadic fire from the farmhouse, the constables form a ragged firing line, while the Martian cutters close in. 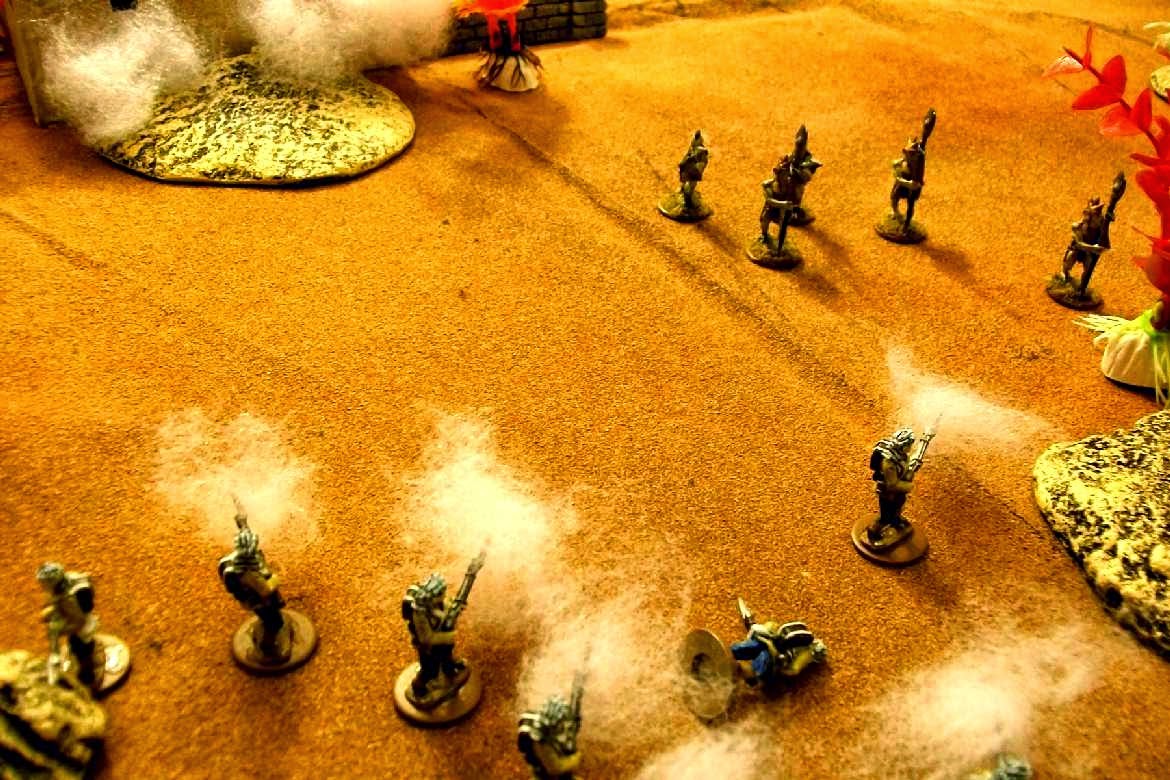 Turn 6: Contact. Despite their desperate fire, the constables couldn't break the Martian charge (a volley fire rule here wouldn't go amiss). The band of cutters would have their chance for revenge. 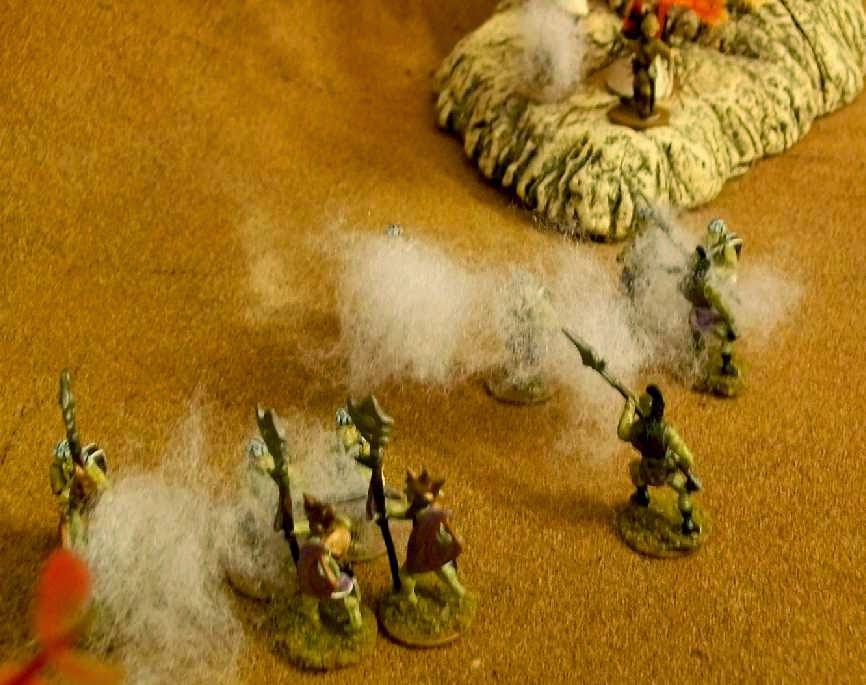 Turn 7: Melee. The cutters drop four of the constabulary, while losing only two of their own.  Victory is within our grasp. However, on turn 8, some hot dice rolls on Megz's part turn the tide of battle against us. 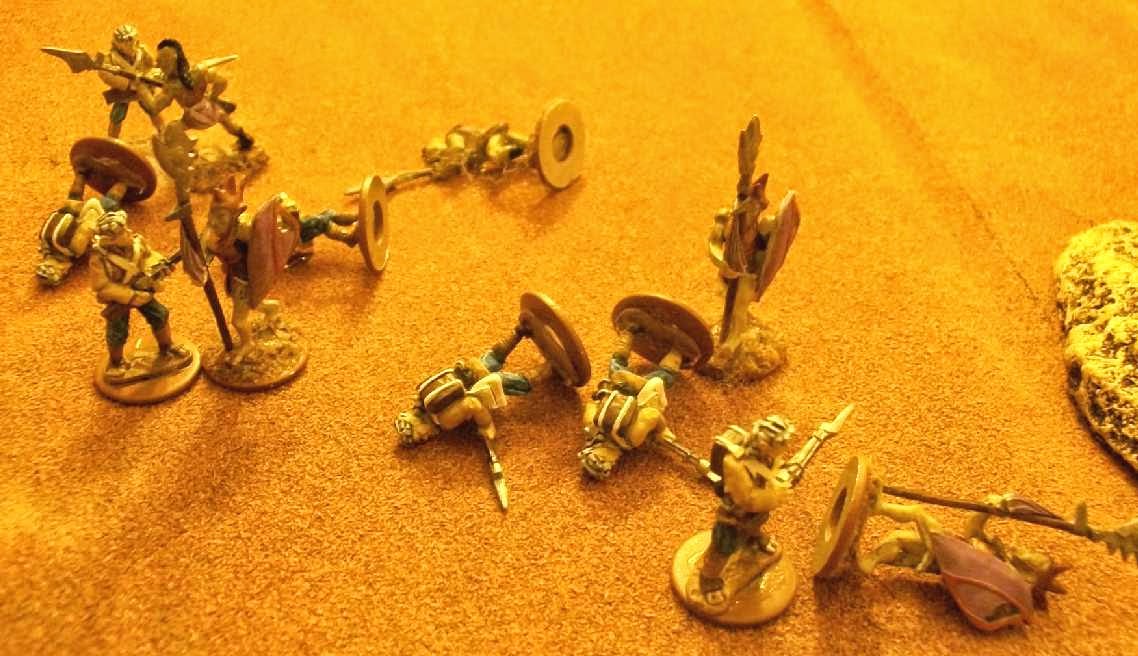 Turn 9: Sootamon flees.  While the Martians had inflicted some serious damage on the colonial constabulary, Sootamon decided to take no chances, and slips out through the back garden. 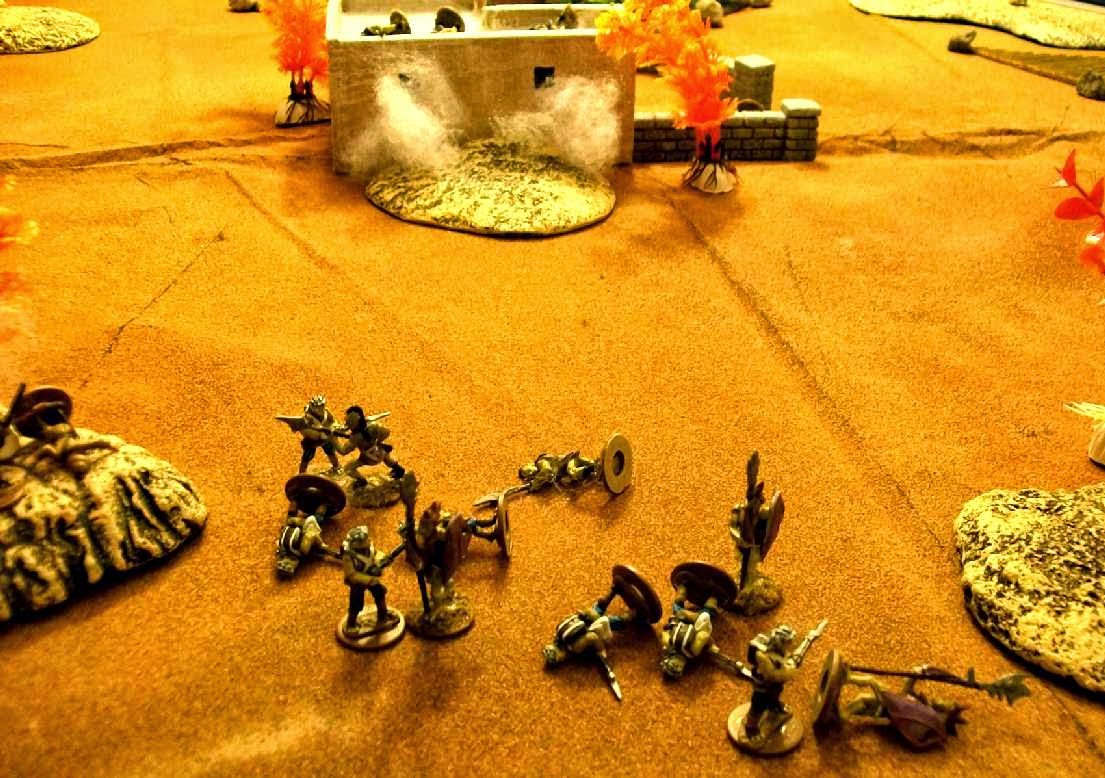 It actually took the Khal three turns to flee the farm house and exit the map - the Constabulary were caught up in the melee and were unable to interfere.  The Hunt for the Mad Mullah would have to continue...

I LIKE these rules. They are excellent for a small-scale engagement, move quickly and give a good result. This scenario felt like a skirmish level Soldier's Companion game.  The lack of morale rule is a minor issue, and it would be easy to set a morale test level for a warband - say 50 - 75% casualties, or when a leader catches it. In fact, most of the Soldier's Companion morale modifiers can be imported with little conversion.

Some other minor mods might be a modifier for the target charging straight at the firer, possily with a pluck roll to have the shooter stand fast.

British firepower was telling (as it should be), with Martian muskets firing every other turn. The Martians had an advantage in melee, but there were still constables shooting while the melee raged, and eventually, the Martial cutters either fled, surrendered, or were shot down.

Because the miniatures are individually configurable, it's possible to give some specific flavour to the units, and therefor, the scenario.  The slightly sneaky Lt. Bertie being just one example.

I'm looking forward to introducing In Her Majesty's Name to the Friday Night Pals, soon.