As the government ministries of Idaeus Fons sort out the logistics, including who is going to pay for the army's little adventure, the reenforcements for the recapture of Fort Miami are mustering.

In short, I've finished my second set of two dozen Tirailleurs Martien, and I'm just a bit chuffed at the moment. 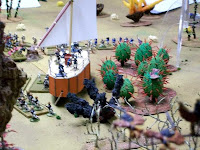 At right, a picture of the Tirailleurs defending a grounded kite in French service during a raid on the Tempe Hills liftwood groves.  The outline of a flying High Martian can just be seen at extreme lower right.  This picture was taken during a playtest game for Cold Wars.  I will be giving a sneak peek in an upcoming post.