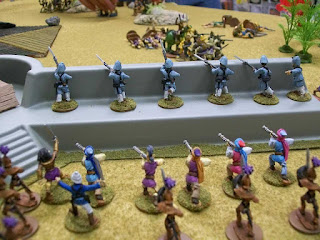 Fort Miami du Lac sits above the dry canal on the border between Niliacus and the Mare Acidalium - 300 miles south-east of Idaeus Fons. The canal has long since ceased to carry water, but still carries trade, as the caravans from Niliacus, Oxia and Thymiamata make their way via the canal bed to the markets of Idaeus Fons. These caravans must pass through the sleepy customs station at Fort Miami du Lac.

All is not as it appears, as the princes of the Mare Acidalium, angered by French encroachments on their territories, arrange for a force of "bandits" to capture the French fort.

Some members of the Rattrap Hill Mob (Rob T., aka Major d'Onri and Mike L. aka Dr. Goldwyrm) assembled at Maplewood Hobbies to give this scenario a try. Both had played Soldiers' Companion before, though neither was by any means an expert in the mechanics.  Fortunately, Soldier's Companion is a pretty intuitive system, once you get to know it.

There was also a mounted troop of Chasseurs de Mars, from the garrison, out on canal patrol.  The French would have to dice for them to arrive.

The  5ème Milice (5th Militia) were one of the more interesting units in the game - comprised of elements of the old Idaeus Fons Royal Army, they had been defeated by the French in several battles in the late 1870's, so were the equivalent of Egyptian Fellahin after Sir Garnet Wolsely gave it to them laldie in 1882.

Nothing terribly special about the indigs, half shooters, half cutters - excepting that as they were not Œnotrians there were no shield gunners, and the foot were all irregulars.  Since the ranks were a bit depleted by the shield gunners being rendered hors le combat, I allowed the Martians to combine the shooter half-companies together to give them some kick and a bit of staying power. 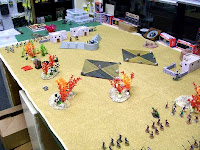 The Fort was set up to resemble some brick/adobe buildings and an ancient Seldon-era ravellin. The French gun was placed in the revetment.  I gave Major d'Onri the option of placing a detachment well forward in the customs house, but he wisely decided to keep his forces concentrated.

Turn 1, 2:  The Martians enter - shooters in loose order with cutters in mass.  Mike left two of his massed cutter bands unscreened, and the French happily reached out across five feet of game board to teach them un petit morceau de respect.  A burst of shrapnel nearly obliterated a half-band of cutters (Rob had rolled a five on close order troops - five down, five running for home). 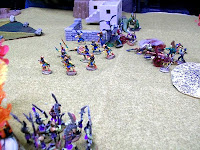 Mike the Martian quickly adjusted his formations so his skirmish line of shooters could cover the heads of his rough columns. He pushed his guns forward.

Turn 3, 4: Mike's Martians continued to advance, while shells from the 80mm howitzer dropped around them. The Martian heavy guns began to fire on the howitzer and the troops atop the redoubt, both having good saving throws due to the heavy cover. 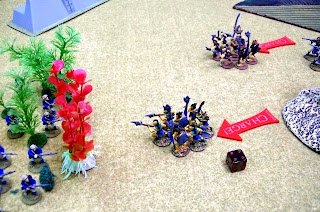 
Turn 6: This is the turn, in hindsight, when the battle went all pear-shaped for the French.  The two bands of Martian cutters reformed in preparation to charge the Tirailleurs.  Major d'Onri decided to pull the Tirailleurs out of the brush, and fall back on the redoubt, only to have them catch some rounds from the Martian heavy guns. Only one Tirailleur figure went down, but during morale, the unit became Checked. On the same turn, the French gun crew, which had lost 3 out of 4 crew, also went Checked.

Turn 7 and 8: As the Tirailleurs on the French right flank were being driven in, the gun crew was hit with a Martian charge over the redoubt. This actually took two turns, as the Martians had to fight their way over the redoubt glacis, still, it was all hitting the fan about the same time. Major d'Onri had pulled the militia off the right glacis, and stationed the marines there. 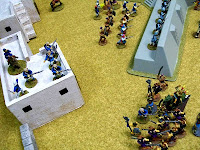 Turn 9: The Tirailleurs failed morale and ran for cover - the nearest barracks rooftop. The militia by half-company were hastily thrown into the gap left by the retreating Tirailleurs. The remains of three cutter bands, about 20 figures, charged the militia, who went checked, failed morale and retired to their barracks.


Major d'Onri decided he'd had enough, and ran down the Tricouleur.  The Chasseurs never arrived. The sauvages Martien had carried the day.

Post-Game Thoughts
This was a very close game.  Sometime on turn 8, as his defense was crumbling, I turned to Rob and said "I never saw this coming" and he agreed - it all went to hell for the French over the course of two turns.

Balancing games with the French Martien Coloniale is proving to be un peu délicat.  The mix of troop qualities and weaponry makes them quite formidable in the attack but a bit fragile in a defensive posture.  I like this - I don't feel like I'm playing the British in blue tunics with funny accents.

The French could have done with the arrival of the Chassuers de Mars, but Rob kept missing the roll by one.

Dr. Goldwyrm (Mike) has quickly developed a knack for running irregulars and Martians.  He sighted his guns very well (never once masking his batteries) and kept up a galling fire on the 80mm howitzer.  He also knew when to throw his shooters into a melee if that's what it took to carry the fight. I'd like to give Dr. G. a few companies of 1882 Egyptians and see what he could do against the British.

Rob did well enough, considering the irregular quality of his troops. I intentionally shorted the French on Veteran troops, to balance that they were on the defensive, in cover, with a gun. C'est le guerre.

I'm considering giving the French a +1 to their damage rolls with shrapnel. Historically speaking, after abandoning mechanical guns post 1871, they spent the next two decades developing better shrapnel. Gamers wishing to simulate this would severely limit French access to gatling guns, mittraileuse etc., until very late in the period (post 1898). 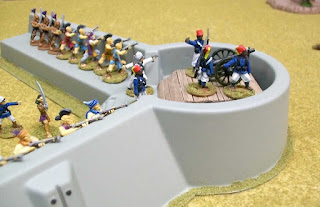 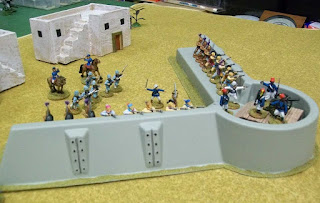 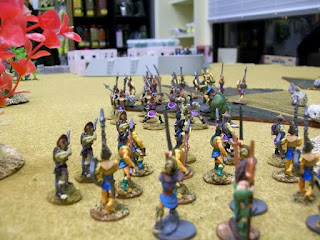 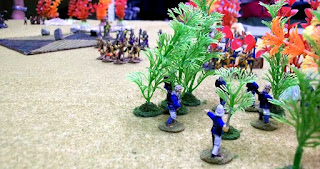 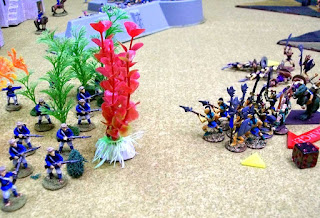 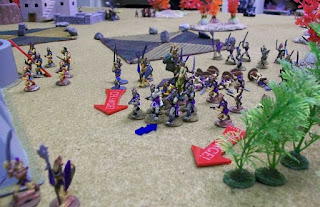 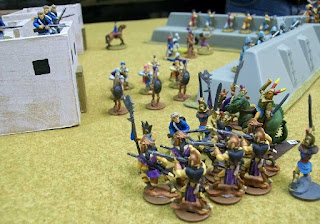 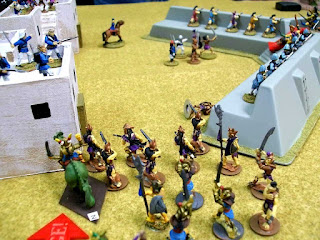