The Mark1 weighed 3000 kg., featured a Hotchkiss machine gun in an armoured cupola, and could achieve 50km per hour.

What follows is my Space:1889 fictional addition: 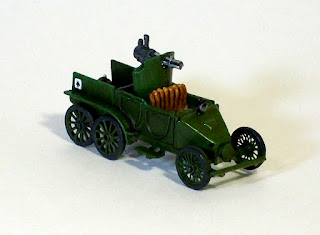 The model was converted from the Reviresco  Six-Wheeled Racing Car.  The first caveat is, while listed at 28mm scale, it's closer to 22mm, being in the scale I refer to as "Old 25mm".  The kit has a lot of parts, many of which aren't needed for this conversion - canopy, baggage rails, valises,etc. which can go into the bits box.  I'll ceratinly be able to use the valises later for travellers on Mars. 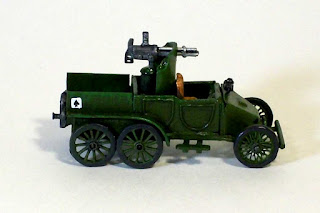 The 3-lbr H.R.C. came from the old Houston's Ships line, available from The Virtual Armchair General.  The armoured cupola is from the Reviresco Starguard line - it has lain in the bits box for a decade.

The rear side panels were cut from plastic styrene card - you can see the gap in the picture to the right where I didn't get quite flush. The front fender was converted from the rear luggage rack.  The twin engine was dremeled down a bit to provide more space for the gunner.

When I first unboxed the mini, I must confess I was a trifle disappointed with the size, but having muddled through, it's not quite as bad as I thought.  I was very set on matching the shape of the original C.G.V. bonnet/hood, and Reviresco's car was almost spot-on.

I still need to find a driver and convert a gunner.  I'm looking for the old Houston's 25s Zulu War Ox Wagon Driver in Pith Helmet, as the space in the front seat is tight.

*Crew get the armour rating as an addition to their saving throw.

Using the C-G-V Mk.II in Space:1889 presumes a slight acceleration of the historic technical timeline. The technology for an armoured car was certainly there, but the necessity was not yet quite clear. Etienne Lenoir had patented an internal combustion engine (albeit running on coal gas) as early as 1860, he sold the patent rights to the Compagnie Parisienne du Gaz.  Subsequent developers introduced petrol, and hey! Presto...