For a start, I think the "proper" pronunciation of Oenotrian is "E-not-tree-an", with a long "e" to start, and not OH-not-trian as I occasionally hear.  The reason being that "Oenotria" is a classical Greek alternative name for Egypt, when it was spelled "Oegypt", and it follows the vast majority of the Greco-Roman Martian place names.  H.P.Lovecraft liked to use the word "Oegypt" in his poetry. This form survives in the 19th century spelling "EncyclopOEdia".

The same would hold for the "Moeris" in Moeris Lacus being pronounced "Meerus", and not "Mo-ris" unless you actually *want* to name your Martian geographica after the First Stooge.

Over the Christmas break, I finished three Martian cannon from the Paroom Station line carried by Brigade Games.  I've been using English Civil War cannon for my Martian artillery, and I'm really pleased to have begun the upgrade to these - I love these figures, especially the ancient sea-monster leokampoi ornamentation. 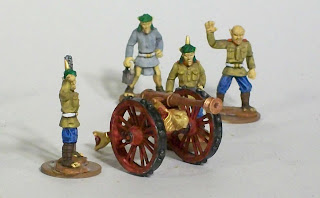 They are not cheap - about twice the price of an Old Glory set of ECW artillery, but the capture the feel of Oenotria, or Tekumel, very well.