Rounding out the Œnotrian artillery park is the mighty Lob Gun.


While there is no direct Earth equivalent on the Soldier’s Companion artillery tables, the Lob Gun’s performance equates to that of a 10” or 11” mortar. As non-rifled, indirect artillery, a lob gun only hits on a 6, regardless of range.  However, with a range of 6 feet on the table, the lob gun can reach out and threaten most units in your average Soldier’s Companion game.

Lob Guns don’t work well against open order infantry, and are best used in defense of towns, where they can threaten enemy vehicles, like slow-moving British land juggernauts (tanks) and aerial gunboats. The Lob Gun’s slow rate of fire (1 shot per three turns) means they are best deployed in pairs, or even better, in threes.  Three Lob Guns, fired one per turn defending during a British assault, might goad the Red Terrans into launching a premature attack.
. 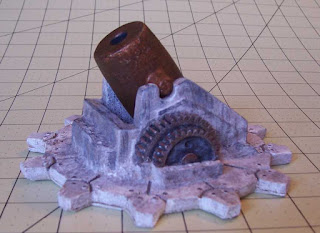 The particular model shown is from J.R. Miniatures and is cast in two-piece resin (base and barrel).