These photies could probably have gone with the previous Tripod post, however, I don't get to post as often as I like, so whey-hay, here we go:

Here's the original front/bow of the crew compartment - as mentioned, I've decided this will be the rear/aft of the walker. 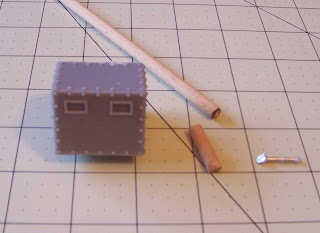 The piece of 1/4 inch dowel that has been cut for to serve as a firebox can be seen.  The silver sliver is an HO scale railway smokestack.  There is a larger, white metal, smokestack supplied with the model which is fine - I just preferred the look of the smaller stack.

Below is the "new" front/bow.  The stack housing has been milliput-ed over and some styrene card glued on to simulate the gunners position. 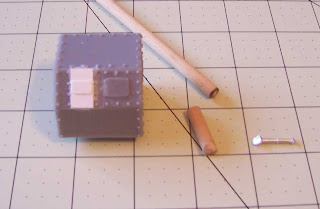 Here is the assembled smokebox, stack and water/oil tank. I really do think the reversed cab looks better this way! More praise and glory to Ironclad for designing a model that is easily kit-bashed! 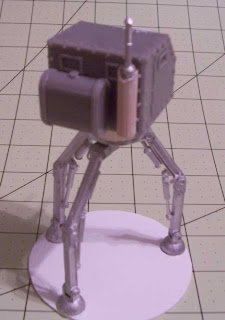 Below, atop the three legs, is the 25/28mm Sci-Fi console base, used for the running gear box - the top (not shown) looks a bit like a TARDIS column.  I will need to figure out where to get more of these if I want to make another tripod...(Edit: I have since discovered, a soft-drink bottle cap will work as well.) 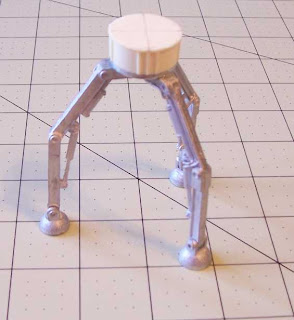 Joining the legs was simpler than I thought it would be - I used some two-part epoxy to fasten the legs to a fender washer.  Once dry (and I had  to hold the legs down with my thumb for 10 minutes while watching the Game of Thrones) the washer and legs were easily epoxied to the gearbox. 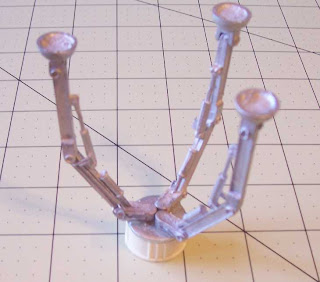 The model needs a base, if only to protect the legs from catching on something and snapping off. I have 2" diameter sheet steel bases that were too small to fit the "feet", and a large 3" fender washer that I decided was too heavy.  Finally, the model was epoxied to a styrene-sheet base (actually two pieces, stuck together). This provides a nice stable base without making the model too heavy. 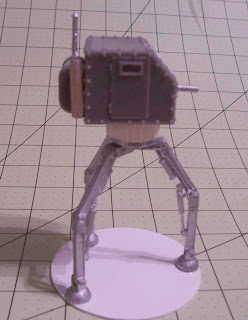